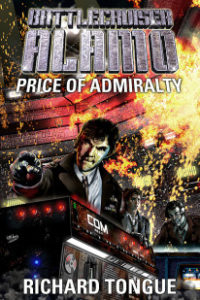 …It’s like Star Trek: The Next Generation, minus the cringe.

Erica and I first came across Richard Tongue’s work while trying to find an artist for our own book’s cover. Impressed by what we saw, we ended up using the same artist. Erica isn’t a huge fan of space opera military fiction, but I remembered having a ton of fun reading Timothy Zahn and Dean Wesley Smith back in middle school, and so I decided to go ahead and give the Battlecruiser Alamo series a whirl, starting with The Price of Admiralty.

The plot and characters of this first series entry are already well-described by other reviewers, so I won’t spend a lot of time covering that. Suffice it to say, a lot of the well-loved tropes and plot twists that we expect from any good scifi milfic are present in droves, right down to the mandatory zero-gee spacewalk to recapture the bridge from the enemy. The characters are the ensemble of archetypes we all expect, from the sexy-veteran-ex-wingman-turned-tactics officer to the don’t-take-no-guff-sawbones-ship’s-surgeon. And of course, the ship itself starts out as a nonfunctional mess thanks to the ressentiment (not resentment, but rather the French word for “anger and jealousy”) of its previous crew and commander. Actually, that whole scenario made me think of the allegations that Bill Clinton’s staffers removed all the “W” keys from the White House computers (also causing $15,000 in other damages) before handing over the reins to Dubya back in 2004.

But none of this is bad: these are the things that we milfic fans love, desire, and outright expect their authors to produce. We want a scrappy crew of misfits making the best of a leaky rustbucket of a ship to overcome an impossible situation through pluck, irreverence, and lots and lots of bullets. Which harkens to the point I first brought up: this is like Star Trek TNG but without the cringe factor. Although I was a fan of the show (and even videotaped its final episode when we still had VCR’s), I never got over how bothered I was by the utopian perfection of the Enterprise D and its crew. Really, it was a show about well-adjusted professionals performing their duties admirably in the most advanced ship in the galaxy, funded by post-scarcity economics where replicators can make you earl gray, hot, on command. And honestly, that annoyed me. Conflict and deprivation create drama. A lack of those things, while desirable in real life, is boring as hell to sit through.

So The Price of Admiralty hits all the high notes for me. Space is a terrible and dangerous place where you will always be clawing at the bleeding edge of survival, and yet you still have to make money. I’d hate to live that way myself, but it’s damned fun to read about other people doing it. I will definitely be checking out the next installment.