One of the best parts of living in Rhode Island, particularly Providence, is that it’s an amazing destination for foodies as well as amateur and professional chefs.  Erica and I are definitely in the amateur cook category, but we sure have some world-class ingredients.  Tonight we had a smaller dinner, just a one-course-one-bowl affair.

I’ve never really understood the thing against Brussels Sprouts.  Probably because the first time I’ve had them they were prepared extremely well.  Sauteed in butter with a wine reduction and plenty of chopped bacon mixed in, as opposed to steamed without salt or fat, which allows the natural bitterness to become unpleasant.    For tonight, I happened to have Sprouts obtained from the Brown University Market Shares program, Smoked Boar Bacon (that’s right, Boar Bacon) from PV Farm stand, and wild “chicken of the woods” mushrooms from Rhode Island Mushroom Company. 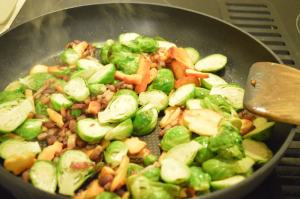 I sauteed a garlic clove, chopped mushrooms, and chopped bacon in at least an ounce of butter from Rhody Fresh until tender, and then dropped in halved Brussels Sprouts and yet more butter.  Add salt and pepper, and you have a pretty tasty, savory dish.

But just bacon and sprouts needs some sort of starch and at least another type of vegetable, so I combined these with rice and curtido, an El Salvadorean pickled cabbage dish that’s typically served alongside pupusas.  Multiple recipes for curtido exist online, such as this one.  What you really need to be successful is a crock, though. 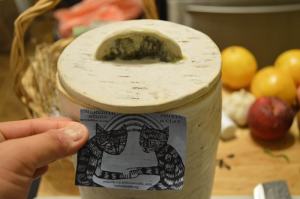 Erica has an eye for amazing crocks, and made our curtido in this amazing, hand-made crock by Meredith Stern.  It holds a hell of a lot of cabbage and comes with an internal weight, which is important in fermentation of this sort. 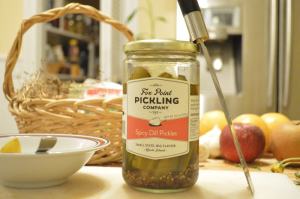 While putting the final touches on dinner, I couldn’t help but snack on some spicy dill pickles made by Fox Point Pickling Company.  I just picked up a jar at the Hope Artiste Village Wintertime Farmer’s Market.  The pickles have that appealingly deep bite with just a tantalizing whisper of carbonation that you can only get with true lacto-fermentation, but remain crisp, unlike a lot of their counterparts. 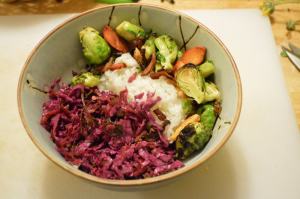 Finally, dinner.  We ate this in a vulgar display of power over food as we watched episodes of Welcome to the NHK. 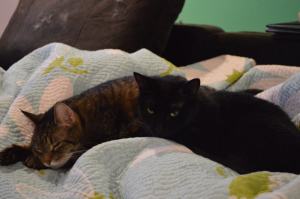