Today I inspected our bees on one of the first sunny days of the season.  It’s been a few weeks since using Miteaway and since then the days have mostly been rainy and cold.  Thankfully, the bees really don’t care what we do for the most part, and the cycle of hive life continues. 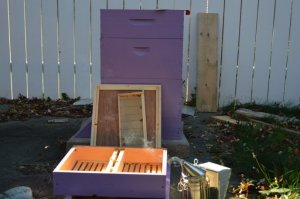 After suiting up and putting on veil and gloves, I lit the smoker and let it get to a nice, thick white blaze.  Currently the hive has 2 brood chambers (deeps) and a honey super on it (medium).  The very top, which is laid out on the foreground, is a feeder. 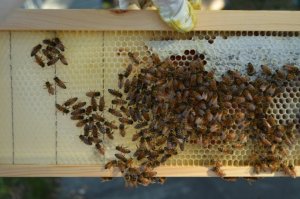 The honey super frames weren’t well-developed, but there is some capped honey present!  We’ll probably be taking the capped sections for comb treats.  The wax from the cappings (the extremely white stuff) is usually harvested for beeswax and turned into candles, soaps, etc. 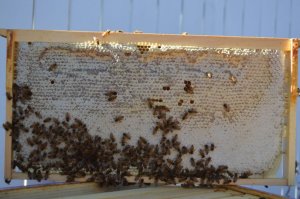 The top brood chamber has several frames which are completely filled with honey (probably what Laline Paull refers to as “The Treasury” in her novel The Bees).  This is a sign of winter preparation – they’ll eat all of this honey to survive.  Though it’s tempting to harvest from these frames, they’re actually all filled with pupal bits and mites. 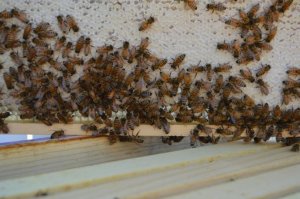 Finally a closeup of muh bees!  Only one tried to sting me this time.  That’s what we consider an exceptionally gentle hive.

Bryan and I recently acquired a Nikon D3200, in part to populate this blog with some much-needed color. I admit that I am a novice photographer, and I look forward to learning as I go.

Recently, I was fortunate to get back in touch with a friend from my undergrad years. Dan and I were American delegates to JASC back in 2005. These days, he’s doing fascinating work on the world of soccer and is living the life of an ex-pat in Tokyo. His personal work is up on his site, Third Lens Open. He kindly hooked me up with some infographic guides on how to get started with this DSLR.

I’ve always been a little intimidated by photography. I did painting and illustration as a kid. The media I used gave me, rightly or wrongly, a strong sense of control over the final results of my work. If the result was good, it was because of my skill–likewise, if the result was poor, it was because of my lack of skill. Photography seems much more elemental, with forces well outside of my ability to influence. Composition, lighting, other conditions–these are things I could define when working from scratch with oil or pen, but when captured out in the world through a lens, appear feral and uncooperative.

I have never taken a good photo, but I aim to change that soon.

One of the things that we are creating is a series of novels based on a science fiction universe we’ve dreamed up and added to over the last few years.  For a long time, we were both part of a forum RPG site based loosely off a shounen manga series whose main conceit was “special people with special powers living in post-apocalyptia.”  The latter part may not actually be true, but that was certainly our take on it.  Blimps and radios coexisting with mud huts and feudal systems of government tend to leave that impression.

Something that we discovered we both liked was the opportunity to develop the history and plotline of the nation our characters inhabited.  Strangely, no one had really sought to do that, and when we wrote down our theories about who was in charge and why (often while soured on whiskey and given to claims), people started believing us.  Though it was fun to do, we wanted to create something more, and something we could truly call our own.

There are two novels in process so far, both co-written though started separately.  Erica actually started writing hers first during NaNoWriMo in 2013 and Bryan churned his out during the last months of his post-residency fellowship.  Set in the same universe, they’re companion books, with Bryan’s taking place almost 50 years later than Erica’s.  So what are these books about?

Eight hundred years after a spectacular collision of superhuman megalomania and nuclear weapons, the Middle Ages are back with a twist.  Feudal armies clash with not only pike and sword, but also rusting Abrams tanks and fearsome bioelectric magic.  Cast by young battle-mages enslaved by the debts of their ancestors, prana is the rarest and deadliest weapon on the battlefield.

That’s actually an excerpt from an early query, and although it probably didn’t work well for a literary agent query letter (due to being kind of an infodump) it’s a nice summary of what this universe is about.  Now, imagine this rifle-and-sorcery setting with a dysfunctional group of mages resentfully led by a woman whose goal in life is to have fun no matter who dies, fighting against the elite forces of a world-conquering empire of leftists who may actually be the “good guys,” and you have the setup for Guns of the Temple.

Bryan Choi first plunged into the classic works of the Western Canon while helping clean out his Korean grandfather’s attic in the early 1990’s. To get out of heavy lifting, he quietly hid away and read about musketeers drinking irresponsibly and acting terribly. At Stanford University, he was enthralled by the humanities and studied psychology to understand more about the human condition. He entered medical school and completed an Emergency Medicine residency in 2012. The allure of writing about badly-behaved battle buddies never left him, however, and he continued to write and develop his art in his free time.

Although they’d written together previously, Bryan met coauthor Erica Carson in person when she visited his hometown of Providence, Rhode Island. They married in 2015, after realizing their mutual love of banter. If anyone is curious as to where their uniquely horrid and foul-mouthed characters originate from, one only has to hang out with the couple and their cats for a night or two.

Guns of the Temple is their first collaborative work.

Storygamers is a collaborative adventure in writing, cooking, publishing, and whatever other nonsense washes up on these obscure shores. We aim to inform, delight, and above all, entertain. We are Erica Carson and Bryan Choi. Hope to see you around.