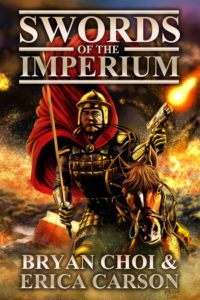 Tirefire the Lesser can’t seem to catch a break. Their country’s been taken over, Taki’s an honest-to-God kingslayer, no one’s changed their unit name, and the unit mascot’s still nowhere to be seen. So what else can possibly go wrong? Swords of the Imperium has the answers:

The Imperium continues its march over the remains of the Argead Dominion toward its next prize: Ursala, ruled by the Sanctissimus Rex and his thousand bloodthirsty daughters.

Taki and his squad, Tirefire the Lesser, must now fight alongside their former foes. But joining the Padishah’s army is riskier than facing the chopping block for a regicide like Taki.

On the warpath in a land of revenant knights and cannibal damsels, the squad faces its greatest challenges yet, and not everyone will make it out alive.

We’re happy to announce that Swords comes out on September 9th, 2016 on Amazon and Kindle Unlimited! And also because we got our act together more for this release, paperback copies will be available much, much sooner this time!

You don’t have to wait, though, if you’re on this page. Until September 8th, Erica and I are giving our free Advance Review Copies to those who sign up for our mailing list. All we ask in return is an honest review on Amazon/Goodreads when the book comes out!

Click here for your free advance copy of Swords of the Imperium.

And for those of you who can’t wait for yet another book of the Polaris Chronicles, wait ’til October. Lucatiel isn’t called the Prince of Maladies for nothing…